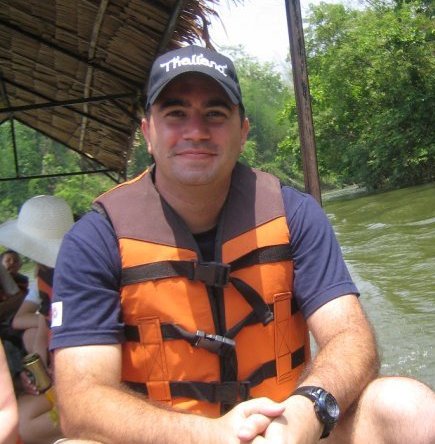 My name is Justin, and I'd like to thank you for visiting my little labor of love here at Free-Clep-Prep.com. You could say this website was more than a decade in the making.

A Bit About Me

It was the best of times, it was the worst of times.... Just kidding!

After squandering a perfectly good upbringing and coasting my way through high school, I quickly dropped out of college after only one semester. Raising more than the usual ruckus as a teenager, I was soon faced with a decision: Go to jail, or join the Marine Corps. That wasn't a tough choice, even for a college dropout. The recruiter told the judge that he'd have me out of the city by the end of the week. Three days after my court date, I was standing on the yellow footprints at Marine Corps Recruit Depot, San Diego.

I'd like to think that the Marine Corps beat the stupid out of me, but it still shows up from time to time. What the Corps did do was to turn a complete waste of oxygen into a productive member of society. It has my undying gratitude for that fact. My parents were pretty thrilled too.

I took a few college classes while I was in the Marine Corps, but they never went anywhere. It seemed me and classrooms just didn't get along. The internet was still pretty young, so online learning was nonexistent at the time. I had heard about CLEP's a few times, but never really paid much attention to them. It just wasn't something that the bases pushed very hard.

The Quest for a College Degree

Fast forward to 2004. I'm getting out of the Marine Corps with a nerve-damaged arm and no college degree. My primary job in the Marine Corps was a Fire Direction Controlman in Field Artillery. That means if you need to make a 100 pound shell of high explosive hit something 10 miles away, then I'm your man. For some reason, the civilian world just didn't need my particular talents. Shocking, I know.

I've always been a computer geek and I really enjoyed my time with the military; so I started looking for an IT job as a government contractor. Soon enough, I was picked up by the best ANC company to ever exist (just in case the boss-man ever finds this site). Using the work ethic the Marine Corps had beat, I mean taught me; I quickly climbed the ranks and was promoted.

I still had no college degree at this point, and I was beginning to notice how big of a disadvantage that was. All of the positions I was interested in required a degree. If I wanted to continue moving up the ladder, then I needed to get a degree ASAP.

After looking on the Internet for a few weeks, I came across the site www.Bain4Weeks.com. If you haven't seen that site, I recommend giving it a quick glance. It's truly an inspirational story. After reading every word on that site, I went straight to the base educational office and asked about taking CLEP exams. They were giving CLEP tests twice a month at this time, and you could only take one CLEP per visit.

I signed up for the Humanities CLEP, bought a very expensive study guide from the Internet and studied for a week straight. The study guide ended up being completely useless, but I still somehow managed to pass. Six credits were mine!

After passing that first CLEP, I was hooked. I became a CLEP taking machine. I was there every time they opened the doors. As I got to know the staff better, I started asking them to hold testing days more often. They were nice enough to do so, and now they had tests every weekend! It was about this time that I found the great community over at InstantCert so the CLEP's became much easier to study for.

Then another breakthrough! Because I was passing the CLEP's I took, the testing center let me take more than one CLEP per visit. I went into overdrive, taking two and sometimes three CLEP's per weekend. Soon the testing center started giving DSST exams as well so I started taking those too. Pretty soon I had accumulated over 130 credits worth of CLEP, DSST, and Excelsior College Exams. At this point I was taking tests just to take them. I didn't need them any longer for my degree but like I said, I was hooked!.

By now I had gained a reputation on base as "the CLEP guy", so I had plenty of military members asking me for advice. The problem was, I didn't know where to point them. There's a ton of free resources online for every CLEP and DSST ever made. The problem is that those resources are scattered all over the place. There wasn't a one-stop shop for free CLEP and DSST study. I always suggested InstantCert, but some of them couldn't afford the subscription cost. After a year of this, I finally decided to do something about it.

I had tinkered around with website creation before, but I knew that this one was going to be different. There are over 80 CLEP/DSST/ECE tests out there that I'd have to create study guides for. My own notes from the many tests I had taken would help, but there would still be much work left to do. I wanted something that would make the actual website creation easy, allowing me to concentrate on creating the free study guides. After all, they were the real reason the website would exist in the first place.

In the past I had done some business with Audrey Owen at Writer's Helper.com whose website had always impressed me. Very functional, but loaded with content (She's a great editor too. She makes it sound like I can actually write!). I decided to base my own site off of hers. That's how I found Site Build It! and a few weeks later here we are.

If you've been thinking about building your own website, then I can't recommend SBI! enough. They take care of the hosting, building, search engine optimization, etc and you concentrate on content. All of this for the same price as just hosting with other companies. The community is also the greatest, and you should know by now that I'm a sucker for a helpful and friendly community.

So what does the future hold?

I've got some really great ideas for this site with the end goal of providing more and more free quality content. If I'm ever going to get to those idea though, I'll need to stop procrastinating and get back to work on those study guides. I hope you enjoy your visit here, and please feel free to drop me a line with the "Contact Us" form. I'm always happy to hear from test takers.

Take care and good luck on those exams!

Return from About Me to
the Free Clep Prep Home Page