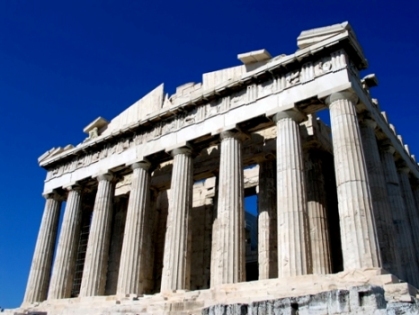 Name of Exam: Western Civilization I CLEP : Ancient Near East to 1648

The Western Civilization I CLEP covers, among other topics, Ancient Greece, Ancient Rome, and the Near East (Eastern Europe and today's Middle East), the Middle Ages, the Reformation and Renaissance, and Europe up until 1648. The knowledge on causes and impacts of major historical events will also be tested.

The Western Civilization I CLEP is a History Channel watcher's dream come true. If you're the type that watches the History Channel for fun (Hey, what's wrong with that?!?) then you'll blow this test out of the water. Most of the information covered on this exam is the mainstream ancient history that we've all learned in high school.

The reason this one is ranked as a mid-3 on the difficulty scale is due to the memorization that it requires. For someone that doesn't live and breathe history, this exam may pose a challenge due to the sheer amount of information tested upon. There's no real need to worry. The nice thing about History is that it doesn't change much! Once you learn the material, you'll do fine. I suspect that many people will only need a refresh of the topics. Let's take a look at what the exam covers.

According to the College Board website, the Western Civilization I CLEP exam is broken down as follows:

This is not a comprehensive list. I've tried to list the topics you will most likely need to study. It should be obvious looking at the above that the bulk of the test is going to be on History. So really hit those history resources hard!

Norton Companion Website - A great resource for Western Civilization. Go down the list for the chapters and read up until Chapter 15 for the material needed for this exam.

Quizlet Flashcards for Western Civ I - I see a lot of the needed material in these flashcards, which someone was kind enough to make. Not a standalone resource (you'll need others) but definitely will get you closer to a pass.

Quizlet Western Civ Flashcards - Why are you even reading this? Go study that first link and take the exam already! Just kidding! Here are some flashcards on Western Civ I. Try the "Test" button if you're feeling confident. You can see all of the Q/A's by scrolling down a bit.

- This one's a winner from the REA folks. Use this targeted study if you don't have the time to go through all of the William Patterson study guides. If you're an Instant Cert subscriber, you can use the forums and flashcards in conjunction with this to virtually guarantee a pass.

As mentioned before, this is your basic "bread and butter" Ancient History. There shouldn't be anything here too difficult for most people, though if you have trouble with memorization then you may want to give this some extra time. Hollywood has been kind enough to help us out lately, with such movies as "Troy", and "300". While I wouldn't put too much stock in the accuracy of those films, at least they re-introduced millions of people to Hellenistic Greece.

In all seriousness, pay attention to the truly Ancient History, with the Summarians and early kings such as Sargon and Hammurabi. Know what they did, or what contributions they made along with the kings/empires that followed. You can do it!

Return from Western Civilization I CLEP to
the Clep Exams Page